In last week’s post, I detailed how our identity – age, gender, orientation, etc – impact how long it takes to find a partner after a breakup. In short, our age and how long we’ve been in school have a big impact on our future love lives. Being a men or a woman, though? Turns out it makes no difference!

This week, we’ll move on to a subject that’s what Nanaya’s all about. Our romantic experiences and desires.

It’s asking users about their romantic experience and desires that gives us this opportunity to do understand how our past relationships, sex lives, attractiveness, and more impact how long we stay single. In fact, as I described in the first post of the series – asking people about how long ago their past relationships ended is how we can do this study. 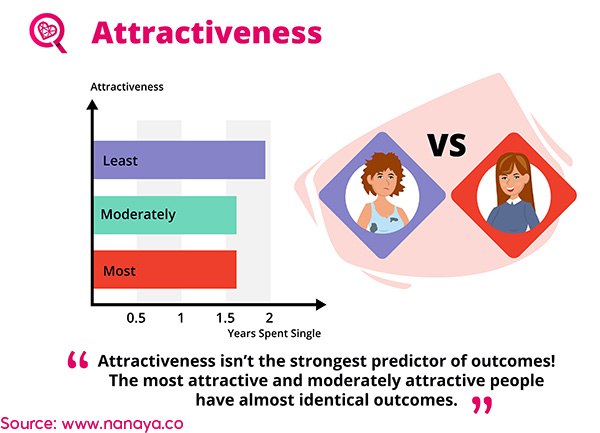 Nanaya does not directly measure how attractive people are. We’re not a dating app and do not have in-app data for which users are demonstrably more attractive than others.

Instead Nanaya gets around this tricky question by asking “What is your success at attracting people you are attracted to?” This wording decouples the subjectivity of attraction with the varying standards of attractiveness across cultures and in-groups. With this phrasing, we acknowledge this results in some fuzziness as “attractive people” with low self-esteem and “unattractive people” with high self-esteem may respond opposite to their general degree of attractiveness. That said, we are confident it’s a good proxy for direct measures, which have their own issues, too!

So what does this tell us? So long as you are moderately successful at attracting people you’re attracted to, your outcomes are indistinguishable from those who are the most attractive amongst us.

If you fall in the Least Attractive group, the average outcomes are not dire by any stretch of the imagination. On average, those who are the least successful in attracting people will spend about five months longer single on average than others.

Compared to any of the other variables we evaluate in this study attractiveness is a rather weak indicator of outcomes!

View of Being Single 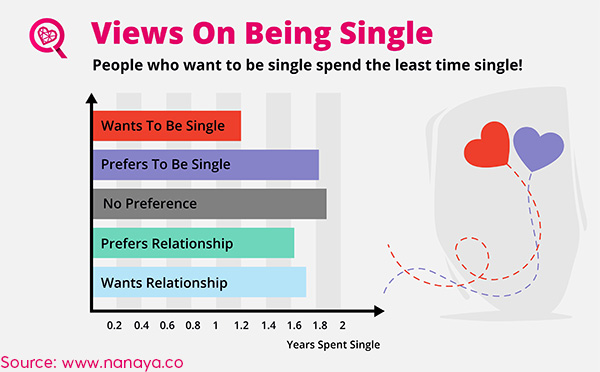 But not everything is about attractiveness? What about how you feel about being single? There’s commonplace wisdom that says people who aren’t trying to find a relationship tend to do the best in finding partners. Is this actually true?

In the Nanaya questionnaire we ask: “Generally, how content are you being single?” The responses range on a spectrum of how much users desire a relationship, with one end being desirous and the other end being not desirous. In the middle of the spectrum is apathy toward relationships.

Table 2. Views of being single data.

The implication of this finding is the commonplace wisdom – that people who are happy being single find relationships sooner – isn’t wrong but it isn’t completely right either.

But this is a question that has some really interesting interaction with income and psychology. Make sure to follow the Nanaya Blog if you want to find out more!

Number of Past Sex Partners 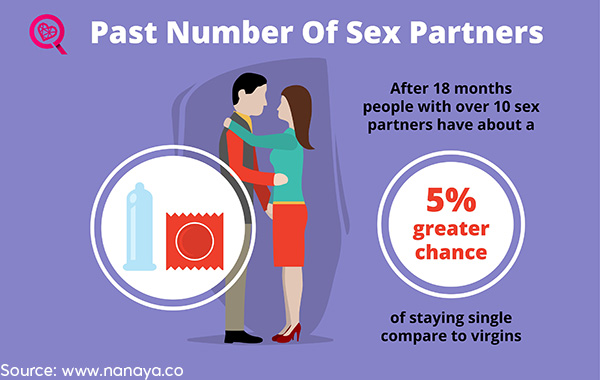 The Nanaya questionnaire asks users how many sex partners they’ve had. The results of just this question will be the subject of a future study because of how fascinating it is just by itself. For this study, we evaluated the average time between relationships based on the number of sex partners people have had – only evaluating users who are over 25 years old to reduce the impact of age on the finding.

Table 3. Number of past sex partners data. Note that the average number of sex partners can be readily inferred from the confidence intervals and binning.

As it turns out, the amount of sexual experience you’ve had makes little difference in how long you stay single! Despite comparatively larger confidence intervals on virgins, their outcomes are similar to those who have sex. At the other side of the spectrum, those who have the most sex seem to spend the most time single but there is similar ambiguity as far as statistical confidence. We look forward to revisiting this result as more data becomes available.

Number of Past Relationships

So does someone’s experience in long-term/committed relationships have a similar non-effect as number of sex partners? As it turns out, sexual experience and relationship experience have different implications, with people who have had more relationships spending less time between relationships. If this wasn’t the case, we’d be pretty shocked!

More directly, assuming the variation of the number of total long-term relationships over age is small past a certain age*, people that have more relationships to spend less time between them because time is fixed! (*This is a subject of a future study.)

In case it’s worth mentioning, people who haven’t been in any relationships aren’t included in any of this study!

Desire to Have Children 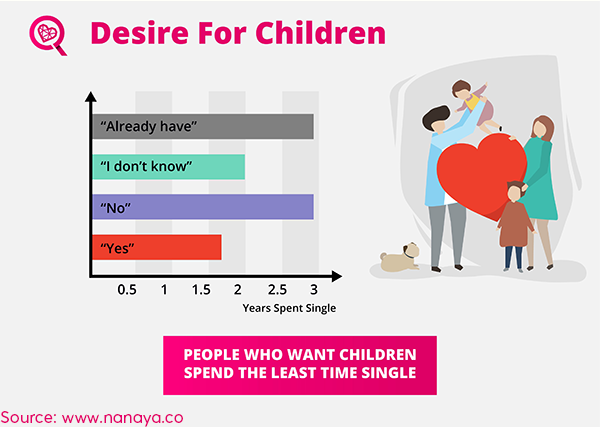 Nanaya asks users about their desire to have children. Depending on how people answer, this impacts how we model the happiness of being single. Here we evaluate the impact of this answer on the average time between relationships. Based on commonplace wisdom, we hypothesized that people who want children settle down faster – but is this really the case?

The answer is resoundingly yes! People who want to have children appear to not only be more motivated to find a relationship but actually do find them faster than any other response. Those who are on the fence take slightly longer.

The results indicate that people do indeed improve their chances of finding a relationship faster after a breakup if they use online dating. The jump from “No Use” to “Rare Use” shows a small reduction in average time between relationships while the jump from “Rare” to “Occasional Use” shows an even larger marked improvement. However, it is unclear if there is any more improvement the more people use online dating beyond “Occasional Use.”

When we look at the 50% survival values, we show that people who actively use online dating reduce the time they are single by up to six months.

Table 7. Average years between relationships based on online dating use frequency.

Because age plays a major role, it’s possible that these results are some reflection of a potential generational gap in online dating use. If you want to know the answer, let us know!

When Nanaya predicts peoples’ love lives, we model at a high-level all social interactions that may lead to a relationship. This includes going on travel! Maybe you’ve had a fling while traveling in another city and have personal experience in why Nanaya models social interactions on travel?

In predicting the future, the Nanaya questionnaire asks users if they are open-minded to finding a partner when they travel. While this is different from having a fling, we consider if being an open-minded travel has an impact on how long they stay single.

Table 8. Data on the impact of being openminded to romance while traveling.

There appears to be some small effect: if people are open-minded to romance on travel, then that does seem to improve the long-term outcomes. But the effect is small and the confidence is rather low.

Income As a Dealbreaker 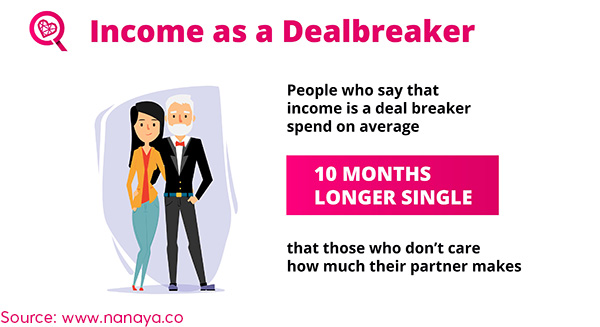 Kanye & Jamie Foxx have tried to warn us of the dangers of gold diggers – but at Nanaya we also want to make sure that gold diggers also have happy and prosperous futures.

Unfortunately, our Nanaya users who indicate that income is a deal breaker will spend more time looking for the right one.

Table 9. Income as a dealbreaker data.

The results are rather interesting. The outcomes immediately following a relationship are somewhat similar, but as time goes on people who desire that their partner make a minimum income will spend longer and longer waiting for that partner. In general, there emerges a difference of 10% chance of finding a relationship after the two year mark.

We note that it is possible this result underreports the odds of those who view income as a deal breaker as not every user who actually feels this way will denote it. That said, the users who are the most adamant about income will and this result reflects that group.

The Impact of Racial Preference on Dating

As a minority in America, race was on the forefront of my mind when I developed some of the social interaction models of Nanaya. Nanaya not only asks users for their race – but how users interact within their own ethnicity and religious groups. This contrasts with most online dating apps which ask race as generic, somewhat insulting categories. For instance, “Asian” covers a lot of different people, with some forms neglecting clear options for people who are of South Asian descent. Because of this, Nanaya tries to offer a few more options so we can capture all the nuances between different communities in order to better predict your future.

To understand our users’ dating preference, we ask two additional questions: Do you have a racial preference? Is race a deal breaker in dating? Again, unlike any other dating site, Nanaya understands there is a difference between a preference and a deal breaker.

But is there a difference in outcomes when viewing race through these two lenses?

Table 10. Race as a preference data.

Table 11. Race as a dealbreaker data.

Given how identical the results are, it’s quite possible that nearly everyone who marked race as a preference also marked race as a deal breaker. In both cases, people who mark race as impacting their romantic decisions increase the time they stay single by a few months.

In a sense, race as a preference or a deal breaker reflects viewing dating and partnership through the same lens where some people fall in-group while some fall in the out-group. Viewing the world through this exclusionary lens reduces individuals’ dating pools, increasing the average time between relationships.

Next week, we’ll post our results on how our romantic experiences and desires affect how long you stay single!