Beyond who we are and our love lives, our social lives also have a major impact on how we date and start relationships. Nanaya models social behavior based on your local area and how you interact with your friends. For instance, one can imagine people who go out on a Friday night have a higher chance of meeting someone new than someone who stays in to watch a movie. But is this commonplace wisdom really true?

In last week’s post, I went into detail how our romantic history and views on romance impact how long people stay single. Be sure to check it out!

How Many Friends You Have 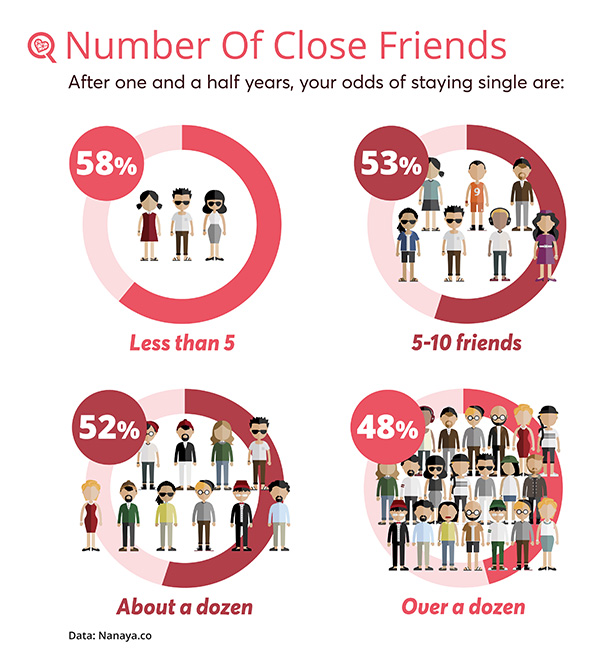 Friends are one of the primary ways people meet their partners, whether at a party, dinner, blind date, or some outing. But it’s unclear if having more friends necessarily corresponds to finding a date faster. In the questionnaire Nanaya asks users “How many friends [in your area] do you have that you see at least once every few months?”, with responses being ranges: Less than five; Five to ten, About a dozen, and Over a dozen. The questionnaire continues to ask about how many men and women are in your friend group and whether or not most of them have already “settled down.“ Here, we only evaluate response to the first question.

Looking at opposites, people who have less than five close friends will spend about 2-3 months looking for a relationship than those with over a dozen friends. In general, a strong pattern persists over all the years spent single that a larger friend network is related to finding a partner sooner.

It bears mentioning that how many friends someone has is related to other parameters that have been shown to have a more significant impact on outcomes, such as age and psychology. As an example, people who have many friends and who find partners sooner may not find their partner through their friends. Rather they may be more social people such that they have more friends than most, while also being more likely to meet new people beyond their friend network.

This implies that if you are single and older or less social, you might try fostering close friendships so your outcomes can be like people who are younger or more social.

How Often You Go Out 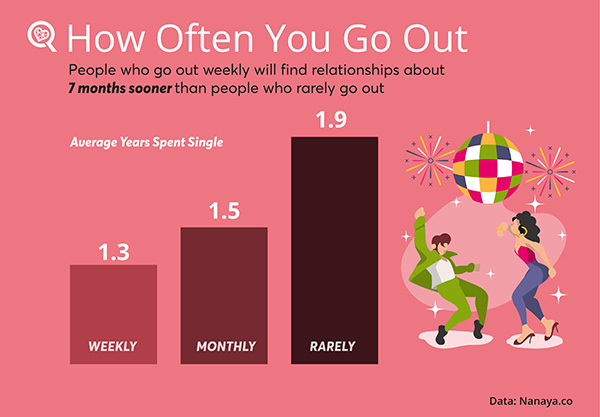 One of the best ways of meeting people is simply getting out of the home and going to cafes, bars, and any places out on the town where you can meet people. This is something modeled in the Nanaya algorithm and something that should be reflected in this study.

Sure enough, people who go out at least once a month will see different average outcomes than those who rarely get out of the home. Based on the correlation between age and going out, this appears to be one of the aspects of being younger that gets you out of “singledom” faster.

Surely, one could theorize that consistently spending an hour or so a day surrounded by new strangers would be better for finding love than being stuck in traffic. And indeed, I did when I created Nanaya’s algorithm to account for the use of public transit. But does public transportation actually have an effect in reality?

From the frequency of response across these categories, most people tend to fall into the groups of people who rarely ever take public transportation and those who take it frequently, with fewer people who take it monthly.

What’s interesting about public transportation use as aspect of lifestyle and its impact on how long people spend single is that it’s (generally) independent of an individual’s psychology or age. It’s primarily related to population density and local transit infrastructure and then to a smaller extent on income and culture.

Interestingly, there is correlation between going out and public transit use and both show a positive relationship with shorter time between relationships. There might be some indication that simply driving around in your car is a roadblock in your path to find new relationships, but this subject would require further study for any clear conclusion.

How Often You Travel

Well sure, people might be open-minded to romance when they travel, but traveling itself might have an impact on finding a committed partner. Even if someone is open-minded to forming a relationship with someone they met during their travels, the odds of that happening are a bit lower as both people would have to be ok with a long distance relationship.

However, not that many people travel weekly and so the statistical confidence in this result is rather weak. There is also another issue at play here, which we’ll cover next week. 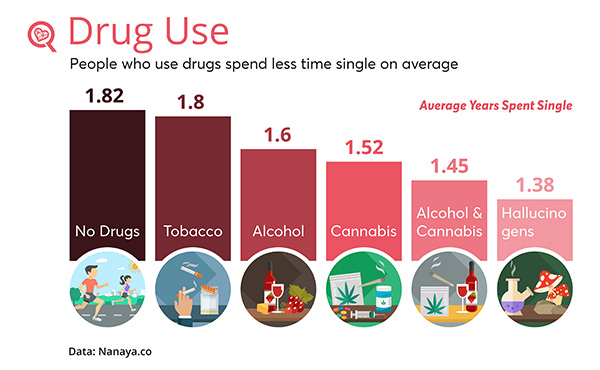 Alcohol is often labeled as a social lubricant, reducing inhibitions and leading the way to sometimes good and sometimes bad decisions. Whichever way, drinking tends to lead to things happening as opposed to not drinking. So naively, one would suspect that people who drink might be faster to enter relationships. Is this really the case?

Indeed, it actually is the case. People who don’t drink will spend about two and a half months longer single than people who drink. Of course, this is based on the whole of the Nanaya dataset, which tends to reflect cultures where it may not only be socially acceptable to drink but where not drinking is socially unacceptable. These results might look very different for cultures where drinking is frowned upon or unacceptable.

Alcohol isn’t the only drug and cannabis is growing in popularity with new found acceptability through medical and legal recreational cannabis worldwide. Cannabis certainly has different effects than alcohol, in terms of how socially it’s consumed and lesser effect on inhibitions. Yet, like alcohol, people who enjoy cannabis will spend less time single than those who don’t.

So the next question is, what about people who drink and smoke cannabis?

Table 7. Alcohol and cannabis use data.

The trend continues – people who drink alcohol and enjoy cannabis will have rebound times between three and four months shorter than those who do neither.

While alcohol and cannabis use tend to reduce the amount of time spent looking for a partner, what about tobacco?

As it turns out, tobacco has essentially no effect on how long someone stays single. While smoking might be a turn-off for some, it might be possible that smokers might naturally have an affinity toward other smokers that counteracts some of the effect of turning off others. This is something we can further study in the future.

Nanaya also asks users if they use hallucinogens and “other” drugs. We won’t go into other drugs because it’s a bit of a catch all, but how does hallucinogen use impact how long it takes to find a partner?

As it turns out, of all drugs hallucinogens are the ones most strongly related to finding a relationship sooner! While the outcomes look rather similar in the short-term, owing to the large confidence intervals, the trend in out-years where people stay single the longest is clear. It indicates hallucinogen use appears to limit the odds of staying single for periods over five years by about 50%.

For what it’s worth, this work should in no way be construed to support doing more drugs because it leads to less time spent while single. Rather, this result like all others related to lifestyle implies that doing some drugs and spending less time single are related. Some of this relationship becomes uncovered further in the report.

Visit the blog next week when we’ll cover how our jobs affect how long we stay single!