Anyone reading this probably has a job – and that job will have some effect on your love life.

For instance, dating coworkers is an option for some people and not for others – even in the same workplace! Maybe you sacrifice your personal life because your job asks for more than 40 hours in a week? Maybe you have to travel to conferences where you’re bound to run into someone you have something in common with? The more you think about it, the more these small aspects of our working lives can have an impact our odds of finding love.

The Nanaya algorithm takes all these things into account in predicting your love life. We use many variables, such as the size of your workplace, the ratio of men-to-women, how many hours a week you work, your perception of your coworkers, and more to model behavior and predict the odds of finding a match in time.

In today’s post, I’ll cover how some of these variables affect how long people stay single after a breakup.

In last week’s post, I detailed how aspects of our social life, like taking public transit or the types of drugs we use, affect our chances at finding a partner. If you like this post be sure to check it out along with the others in this series.

We did not expect these results and it’s really fascinating. Trying to understand why people with larger incomes stay single longer is a very rich topic and would merit its own study.

In general, the more you make the longer you spend single. Those who make over $150K a year will spend about eight to nine months longer single than those who make under $15K.

There are a lot of potential reasons underlying this observation. Based on the data, education and income are also slightly correlated, with those who are more educated spending longer times single. Interestingly, there’s an even stronger correlation between making more money and having less empathy. As we’ll see later, lack of empathy is best predictors of how long people stay single.

Maybe there’s another partial explanation: the rich have more fun dating? Our data shows the rich do have more sex!

But again, the relationship between income and how long people stay single, and love life in general, is a deep topic that merits it’s own study. All the more reason to keep reading our blog.

(A few caveats. It’s worth mentioning that we only evaluated income for US users over 25 years old. Because we’re looking only at US users, the rebound times are on average higher than the rest of the dataset. Our selection of users over 25 limits the influence of age, as covered above, which has some correlation to income. In our latest launch, Nanaya now asks users about their income in many different nations so we can do an international study at another point.) 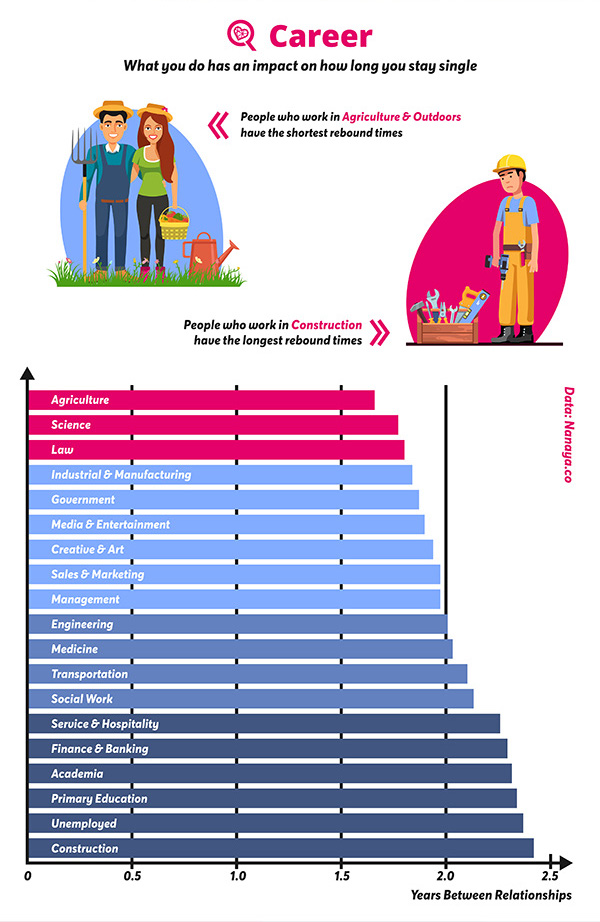 Every workplace is different, even within the same industry. The ratio of genders, workplace culture, and location all have an impact on how you interact with co-workers and whether or not it makes sense to date where you work. The Nanaya algorithm takes these into account when predicting the future. In the algorithm, we determine the odds of anyone being compatible to you at work based on the types of jobs available at your workplace.

We can also see how each job field impacts how long people stay single! The data is below for all job fields and based on all users over 25 years old.

The best job fields for getting out of the “singledom” faster are: agriculture, creative & art, transportation, and media and entertainment. The worst would be academia, finance, primary education, or being unemployed.

In general, the job field does a very poor job in predicting outcomes and the variations in Nanaya user data. What you actually do has a relatively small impact because each job field encompasses a lot of different workplace environments, which average out to be similar to one another. This is one reason the confidence intervals are rather large for each type.

Agriculture sticks out quite a bit though. Why is it so low? While this will be the subject of a later study, and why we’re not evaluating it in this study, the signs point to population density as the major reason. Agriculture work tends to fall in places that have less people. Where there are less people, people spend less time dating around finding the right person because there simply isn’t that much to choose from! In places with more population density, people spend more time dating before settling down into relationships.

Creative & Art and Media & Entertainment tend to treat single people well. These tend to be gender-mixed workplaces with people who are social and creative. As we’ll see in the section on psychology, being social and creative are both correlated with being single for less time. 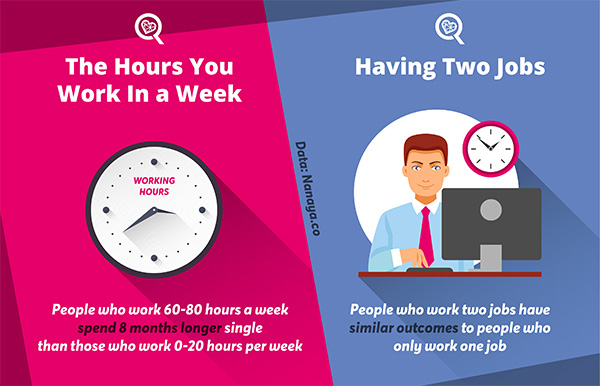 So your career might not have a huge impact on your single life outcomes. This is opposed to where you work and how you work.

One of the factors that the Nanaya algorithm considers is how many hours a week you work. The standard work week is about 40 hours, though some people work less, for instance those who are part-time workers, and some work a lot more, for instance people in clinical medicine. One must imagine that if you spend more than 60 or 80 hours a week working that will definitely have an impact on your love life. But is it the case?

It’s a fairly small impact but to the extent of the 95% confidence interval: the more you work, the more you harm your chances of starting a new relationship after a breakup. People who work 60-80 hours a week will spend about 8 months longer single than those who work 0-20 hours!

For what it’s worth, this is only based on the hours you work at your only and/or first job. This means we may be underestimating the hours people work per week if they have two jobs.

The Size of Your Workplace

Generally independent of job type is the size of your workplace, another parameter that factors into the Nanaya algorithm. Workplaces can range from working alone to being in a large corporate environment with thousands of people you can possibly interact with. Intuitively, someone who works alone probably hurts their chances of finding someone in the workplace…if they’re the only ones. How about those in large corporate environments? Is there a sweet spot of workplace size to improve your odds of finding a relationship?

We can break free of the tables and simply look at the odds that people are still single after 1.5 years. 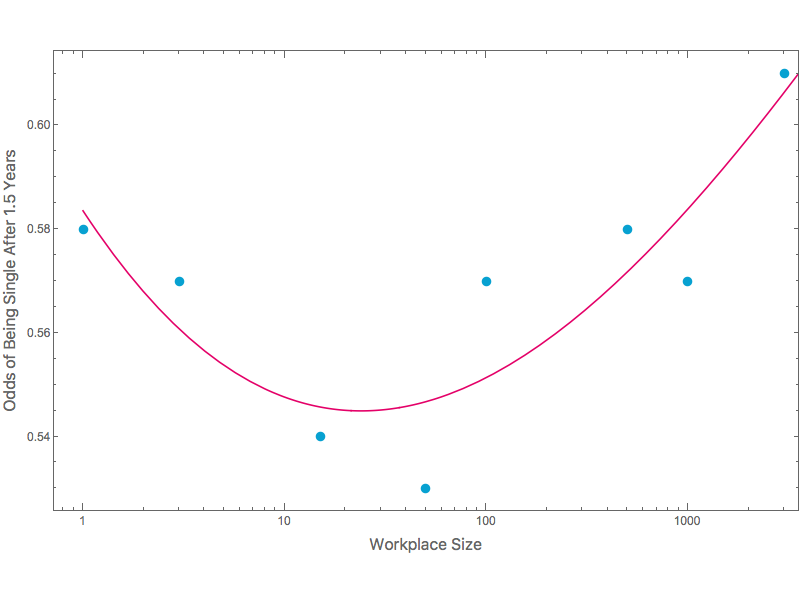 This is another one of the few “U-shaped” curves that shows a minimum around 30-70 people as the sweet spot for people finding partners. This can correspond to several different factors. Smaller workplaces allow for more intimate relationships to build. You can not only know everyone else but also have a chance to really understand people on their terms. If the workplace is too small, you hurt your odds of meeting anyone. While if you work at too large of a workplace, your interactions end up taking place within a small team or you meet people in a cursory way such that you never have a chance of getting to know them. Of course, this is a generalization but an interesting result nonetheless.

In the United States, unemployment is very low at the moment. But a part of this is because full-time jobs do such a poor job of paying people and offering benefits, that people are required to work multiple jobs to simply pay rent and loans.

We have some impressions from the results of income and work hours per week that people who are financially precarious or motivated to work long hours tend to harm their ability to reenter relationships. So we hypothesize that people who work two jobs tend to be at a disadvantage in romance.

Well, turns out that this isn’t the case! People who work two jobs are, with all other things being equal, generally unaffected by the fact they work two jobs.

Visit the blog next week when we’ll cover how our political views affect how long we stay single!