Time to take a break from writing about relationships and psychology and write about something close to home: engineering. Specifically, this post connects fighting wars to forecasting love though an engineering history lesson.

If there’s something humans are born to do it’s stay alive. While almost all creatures have the biological urge to “fight or flight” in dangerous situations, humans are pretty unique in our ability to plan to survive. Planning is hard though. It’s instinctive to “run away from the angry wild animal we just poked with a stick,” but as soon as you add more wild animals or people the complexity increases along with the ability of a group to follow through with the plan. Planning also takes knowledge, but knowledge one day might be obsolete the next. People can spend years planning for business, war, and love only to have them fall through at the onset. To make a good plan takes knowledge of all the things involved in the plan, the system, and flexibility to account for all possible outcomes.

Arguably, people weren’t very good at planning till the 20th century. By about World War II, technology finally caught up such that we could get information from distant events in real time. The scale and interconnectedness of the war forced governments to accept how mind-bogglingly complex planning is. The destructive power of modern weapons and speed of battle in World War II also gave a bit of urgency in formulating good planning.

There’s nothing like self-preservation as inspiration. What resulted was a new discipline, systems engineering.

From a system engineer’s perspective war isn’t just a series of battles. The system engineer zooms out to see a web of interconnected parts: birth rates, the time to heal an injured soldier, grain harvest yields, tank production, and even innumerable things like morale. An example in war planning was the German Tank Problem where statistics helped Allied war planners determine the need for tanks on the ground by estimating the number of German tanks.

After World War II, things got even deeper. The destructive power of bombers and tanks gave way to nuclear weapons that can level nations in less than an hour. To prepare for nuclear war required rapid decision making based on limited information. Thus, the fields of game theory and decision analysis emerged.

As computers were integrated into war, it became vital to understand how information can be gathered and communicated consistently and meaningfully. An effort was undertaken by America’s Department of Defense to create such a framework. In the 1990s the Department of Defense Architecture Framework (DoDAF) was created to help understand, assess, and communicate the complex systems in war. DoDAF is a language to communicate how complicated things work but it’s also a framework of thinking about them.

NASA isn’t a part of the DoD but space travel can be just complicated as military operations. Years ago, I used DoDAF to understand how to plan and cost the construction of Moon and Mars bases over the course of decades. Unfortunately, it’s not as easy as putting things on a rocket and launching it. Finding the cheapest way of doing it takes a bit of effort and worrying about the details, such as how much cheaper a certain module is to build after building the first one and the weight of food.

But women are not from Venus nor are men from Mars. Assessing the dynamics of dating and romance actually takes some rocket science. The Nanaya algorithm was designed much in the same way that decisions on the battlefield are made.

We can all do simple calculations to find out the chances of finding a partner much like I discussed previously, but that’s a single, meaningless probability that isn’t descriptive of the process involved in finding that person. If we want something meaningful, we need to address the entire process.

Specifically, with the help of DoDAF we can build something like Nanaya. Specifically, building a systems model, such as Nanaya, requires the following:

Once we follow these steps, we can get the equations to determine what actually happens in the system. With these equations, we can develop an algorithm for decision analysis. 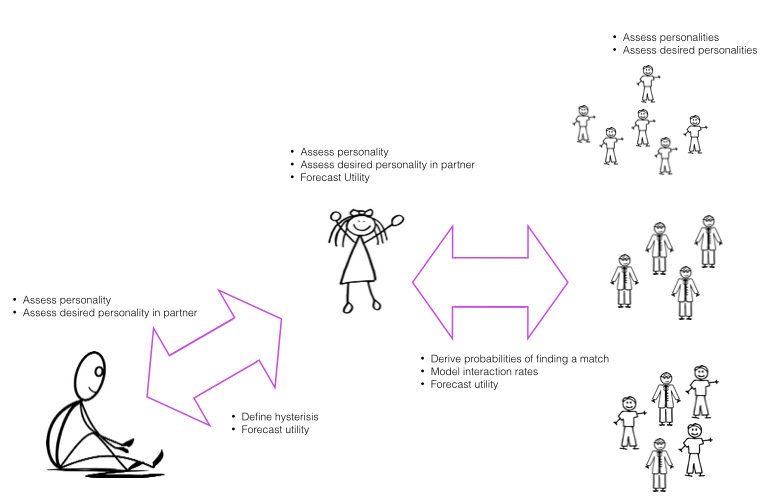 Strange but true: the very tool developed to help fight wars was used to make Nanaya, a service to help people make sense of their love lives.

But it makes sense if you ask me. If the first thing people worry about is self-preservation, the next is intimacy and love. If we’ve developed the tools for self-preservation, shouldn’t we develop tools for love? It’s time to make modern love just as nerdy as modern war.